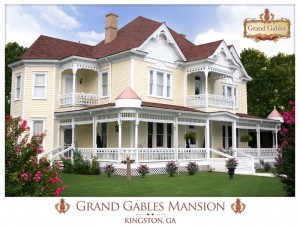 A four room house facing Church Street, along with an outdoor kitchen, smoke house, barn, and “outhouse”, were built on this location approximately 1845 by the McMurry family.  All that remains is the structure that was the four room house.  The kitchen is now located at the Station Master’s 1854 House where it was moved several years ago.  How wonderful it would be if it could be “relocated”.  The smoke house and outhouse have long been gone.

There is a Penelope McMurry (died 1911) buried in Kingston Cemetery and a J.A. McMurry who died in 1910.  These may be Margaret’s parents, as the timeline seems to fit.

On November 3, 1887, Mrs. Margaret McMurry sold the house and property to J. D. Rogers. Mr. Rogers hired Architect John Schmitz and soon began building the beautiful two story addition that now faces Railroad Street.  According to a label found on the reverse of the East Bedroom Mantle it was completed about 1901, turning the original pre-Civil War structure into a modern day Queen Ann Victorian.  A news article in the 1900 scrapbook (last page) at Kingston Woman’s History Club show the house when completed and lists the house as “Gray Gables”.

Clifford Johnson, Sr. (born March 9, 1879- died August 26, 1953) had relatives that resided in Kingston.  However, working with the railroad had him working in Atlanta for a time and that is where Clifford Johnson, Jr. was born March 1, 1908.  In 1910, the Johnson’s returned to Kingston and purchased the house for $3200. Two of Cliff, Jr.’s children are still living in Kingston – Toby Johnson and Charlotte Johnson Bray who were both born in what is now the sitting room.  A younger brother, Cliff, III, was also born here in 1927. “Little Cliff” as he was fondly known, passed away in 2001.

In 2008, the house was purchased by Jeanette Perkins-Graves.  With the help of her father, Morrell Perkins, Sr., the house began her transformation back to the original beauty she had once been.  Many of the people who worked on the project were from Kingston.  As the work progressed, the name “Gray Gables” just didn’t seem to be right for such a spectacular house that had survived over 163 years (total), the burning of Kingston during the Civil War, the weather, and the 1911 fire that claimed much of the “new” downtown.  So her name was changed to GRAND GABLES.  Before the clean-up had even begun, a visit to the house accompanied by her Grandson, Gabriel TenCate (then age 10), the hidden charm and beauty of the house was clear as he exclaimed on entering the front door, ” Oh, Mimi, this is a Mansion!”.  And so, the name – Grand Gables Mansion in honor of his extraordinary vision.

As you enter the front hallway, the staircase is the main attraction.  No structural changes were made to the two story addition.  The original 1845 house was already gutted, and is now a large kitchen, guest bath and pantry/laundry. The wainscoting is original to the house.  The downstairs floors are heart pine, but the floors of the upstairs room were installed using the flooring from old box cars.

The mantles are also original to the house.  There are eight fireplaces, originally coal burning.  The Parlor showcases a gorgeous double mantle that has not been refinished.  The surround and hearth on this fireplace is the only complete fireplace remaining.  However, the surrounds in the Dining Room and Music Room were saved.  As mentioned earlier, the label on the East Bedroom Mantle show the mantles installed in January 1901 and were made by Rome Mantle Company, Rome, Georgia.

Unfortunately, the old barn that stood on the corner at Kitchens Alley could not be salvaged and was torn down.

Work continues on the house and the grounds.  Plans are to once again have a fence around the property and to have a walking garden in the side yard.

Grand Gables is a private residence and also serves as a special occasion event venue.  All services necessary for a wedding, reception, birthday party, anniversary celebration, family reunion and more are available or can be self-catered.  You can visit the web site at www.GrandGablesMansion.com for more information.

Thank you for visiting!

Comment form is closed. You can contact me if you have something important to say about this topic.